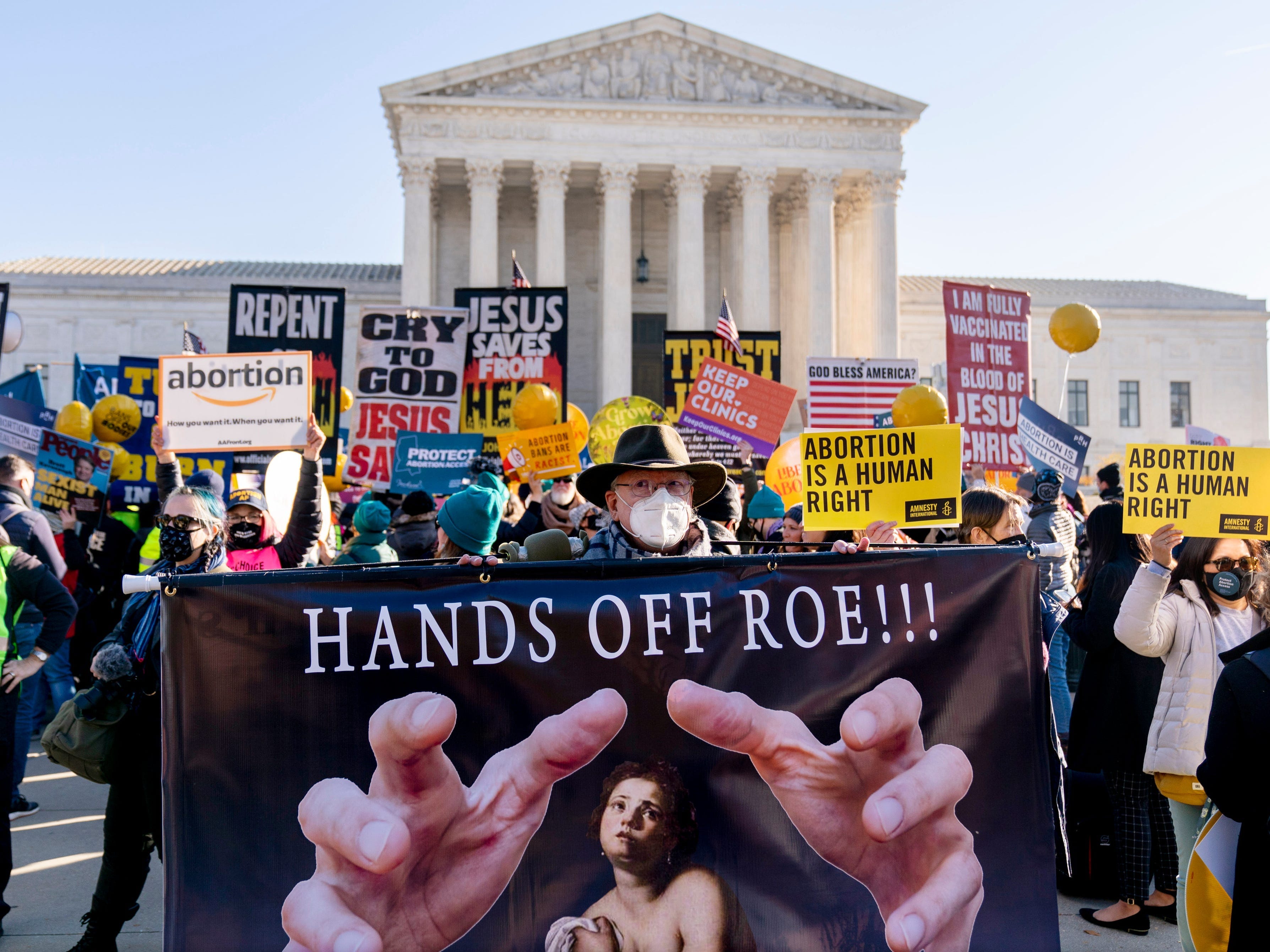 Stephen Parlato of Boulder, Colo., holds a sign that reads ‘Hands Off Roe!!!’ as abortion rights advocates and anti-abortion protesters demonstrate in front of the U.S. Supreme Court, Wednesday, Dec. 1, 2021, in Washington, as the court hears arguments in a case from Mississippi, where a 2018 law would ban abortions after 15 weeks of pregnancy, well before viability. AP Photo/Andrew Harnik

The commission tasked by President Joe Biden with studying potential changes to the Supreme Court has released its final draft report, a cautious take on proposals for expanding the court and setting possible term limits.

The 36-member bipartisan commission was not charged with making recommendations under the White House order that created it. As a result, much of the final report from the group, largely composed of academics who have been studying court reform and holding hearings, is context and history that may be used going forward in proposals to introduce changes.

The panel, led by Bob Bauer, who served as White House counsel for former President Barack Obama, and Cristina Rodriguez, a Yale Law School professor who served in the Office of Legal Counsel for Obama, cautioned that excessive change could potentially erode democracy further down the line.

“Indeed, in recent years, we have seen democratic governments ‘regress’ or ‘backslide’ with respect to judicial independence,” the court wrote in its report released Monday. “This has come about through electoral majorities using their power to restructure previously independent institutions, including courts, to favor the political agendas of those governments.”

The makeup of the Supreme Court has come into even sharper focus following a ban on abortions after six weeks in Texas and arguments last week on a Mississippi case in which the 6-3 conservative-leaning court signaled a willingness either to overturn or substantially roll back abortion rights enshrined in the 1973 Roe v. Wade decision and its 1992 ruling in Planned Parenthood v. Casey, which reaffirmed Roe. A decision isn’t expected for months.

The commission’s review was a campaign promise Biden made in response to pressure from activists and Democrats after the court’s composition tilted sharply to the right during former President Donald Trump’s term. He’s largely avoided the topic since.

During the presidential campaign Biden repeatedly sidestepped questions on expanding the court, and he hasn’t said if he supports adding seats or making other changes, including imposing term limits. White House press secretary Jen Psaki said Monday she had no timeline for how long it would take for Biden to review the report or what happens next.

“It’s not recommendations that he either accepts or denies,” she said. “He asked this diverse group of experts from a range — from across the political spectrum, from across the viewpoint spectrum — to look at and assess a range of issues that have long been discussed and debated by court experts.”

Trump nominated three justices to the high court, giving it the 6-3 conservative majority. Democrats were especially frustrated that the Republican-led Senate kept Obama from filling the seat left empty by the death of conservative Justice Antonin Scalia in February 2016. Then, with Trump in office, the Senate pushed to confirm Justice Amy Coney Barrett to the court following the death of liberal Justice Ruth Bader Ginsburg in September 2020, weeks before the election.

That led to calls by some progressives for changes, including adding seats to the court or setting term limits. Congress originally set the number of justices at six. The number has been nine since 1869.

An earlier report by the panel spoke positively of the potential for term limits for justices. The final report builds on this, devoting a section to exploring the potential avenues to set term limits, discussing the possibility of justices retiring and also of allowing them a significant term before returning to their lower court.

“Mirroring the broader public debate, there is profound disagreement among commissioners on these issues. We present the arguments in order to fulfill our charge to provide a complete account of the contemporary court reform debate,” the report says.

It also substantially discusses the court’s role in the constitutional system, judicial ethics and whether the court should change its operations to be more public friendly. It specifically addresses the use of audio or video streaming of oral arguments, acknowledging while justices are largely opposed to video, audio streaming that began during the coronavirus pandemic could be a way to enable the public to better follow how it operates.

“The commission does not purport to offer a consensus history of the last decades of conflict over the Supreme Court,” according to the report. “Nor does it come to a conclusion about whether the court has suffered a loss or crisis of legitimacy. Commissioners hold very different views on these matters.”

But there’s a growing urgency from some Democratic groups to make substantial changes.

“The court has slipped irretrievably into partisanship, and there is only one solution to that problem: Congress must add additional justices to the bench to restore faith in the institution,” said Meagan-Hatcher Mays, director of Democracy Policy at Indivisible.

She criticized the lack of recommendations. “The American people deserve better than this long-awaited yet deeply unhelpful pros and cons list.”

Fix the Court, another group closely watching the commission, released its own blueprint, which lays out what it says are clear changes the public has said it wants.

“The path to a more open, more responsive Supreme Court is clear as day,” FTC’s Gabe Roth said. “Term limits and accountability reforms are already extremely popular and have broad support among liberals and conservatives. We just need our leaders to lead in order to implement them.”

Term limits could be one way to reform the Supreme Court, according to report from Biden commission

Read Term limits could be one way to reform the Supreme Court, according to report from Biden commission by Business Insider Australia

Behind The Scenes of President Biden’s Supreme Court Reform Commission

The Enormous Stakes of Bidens Vaccine Mandates at the Supreme Court